In Kurt Vonnegut, Jr.’s Slaughterhouse-Five, or the Children’s Crusade, a soldier bounces through time, meets aliens, and relives points in his life, centering around Dresden, Germany, during his tour during the Second World War. Vonnegut uses anaphora for a comical, poignant effect. As I read this book, my mind trails to two things: first, I appreciate the concept of a story within the story and the details which brought the book to life. Most of all, I love the wry sense of humor that ran through the book. “My name is Yon Yonson, I work in Wisconsin, I work in a lumbermill there” (9). With this simple line that brings to mind stories of childhood, Vonnegut sucks me into his world and makes me feel for the character. I repeat the line when I grocery shop. The lesson I focus on when I read Slaughterhouse-Five is the mix of shocking carnage mixed in with the love and basic everyday stories. 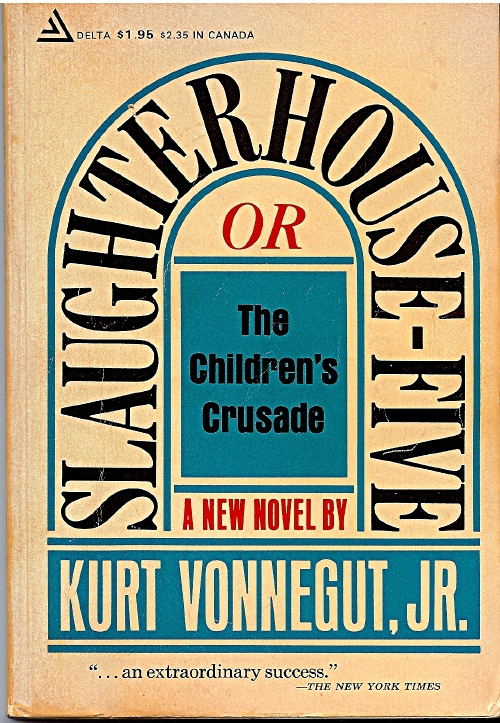 Vonnegut blends the memories of the past in the character’s present.

And I let the dog out, or I let him in, and we talk some. I let him know I like him, and he lets me know he likes me. He doesn’t mind the smell of mustard gas and roses. (9)

How unexpected and nonchalant is it that he writes “mustard gas and roses” (9)? The world that Vonnegut created in this story is amazing and never strays from the war-hero normal guy nonchalance. Another line that sticks with me is: “there is nothing intelligent to say about a massacre” (24). Vonnegut does not pull punches; the insights into the nature of humanity hit like a punch to the solar plexus. We want to hear the story because it is told from the perspective of a survivor of war. Vonnegut creates a plausible, likeable character I want to root for.

I loved the repetition of phrases throughout the book. Besides the Yon Yonson line, Vonnegut repeats “so it goes,” which is an alien statement (45). Throughout the book it is repeated over and over to reinforce the character’s statement that he cannot change “the past, the present, and the future” (77).

One unexpected and thought-provoking idea is that of the soldier who does not want to fight. Vonnegut explores this: “Billy stood there politely, giving the marksman another chance” (42). The idea that a soldier, even an inept one, would give the enemy a second chance at killing them is absurd. But it works because even in the thick of war, “the marksman should be given another chance” according to Billy Pilgrim (42). The idea that a soldier doesn’t want to “save himself” because “Billy wanted to quit” (43) is attention-grabbing—soldiers are programmed to fight, but what happens if the training doesn’t take? What if he is “cold, hungry, embarrassed, incompetent” like Billy (43)? This is an interesting line of exploration.

Billy Pilgrim’s ineptness as a soldier is explored throughout the book. “The most dangerous thing [the Germans] found on his person was a two-inch pencil stub” (68). There are probably many soldiers who go unarmed, but who only carries a pencil to war? And yet when Billy ducks for cover after an air raid siren (73), the reader is touched. We can imagine a soldier traumatized by war as being affected by a siren wail which would “scare the hell out of him” (73), even if was only “announcing high noon” (73). It is reasonable to believe a soldier who has been through difficult events would have PTSD.

I love Vonnegut’s style. My takeaway of this book is summed in one sentence: “He had an hour to kill before the saucer came” (93). This line triggered something in my imagination that explored the What If game. It made me rethink my own main character, the antagonists of my book, and how everyone has someone who loves them at home. All characters start out like kids—someone loves them. For me, the idea of a character waiting for a saucer to abduct him is both magical and ordinary. I want to channel that same feeling into my own work.

Enjoyed this? Buy my books.

Hey, I'm Darlene, a nomadic writer and teacher. If you're looking for writing prompts, inspiration, and a fellow writer to commiserate with, you've come to the right place. If you're a reader looking for a fun mix of poetry, romance, science and fiction, you've found a buddy!
View all posts by Darlene Reilley →
This entry was posted in Adventure, Book Reviews, Creative Writing, How To, reading, Science Fiction, writing craft and tagged 5 star book review, Book Reviews, Kurt Vonnegut, reading like a writer, Slaughterhouse-Five, writing. Bookmark the permalink.