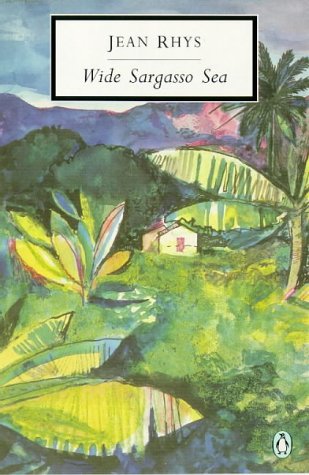 Jean Rhys wrote Wide Sargasso Sea as the prequel to Charlotte Brönte’s novel Jane Eyre, from the perspective of the madwoman Bertha. WSS is the tale of Antoinette Cosway, a young girl in 1830s Jamaica and the circumstances which drive her to marry Edward Rochester, a fortune-hunting Englishman. It is Rochester, in fact, that forces Antoinette to become “Bertha” the madwoman. Jean Rhys’s expertise as a writer is the reason this post-colonial novel is so effective; she envisioned Antoinette as a normal character driven to madness by emotionally extreme circumstances.

Many interesting characters have fundamental flaws that develop in childhood. Antoinette grows up in a seemingly perfect home with a “garden [which] was large and beautiful” as the garden of Eden” (19). But in every garden there is a snake, and in every house there are skeletons. Antoinette’s family was poor white gentry (24), and her mother lived alone for too long (32). According to Antoinette, the darker natives called her family “white cockroaches” (23). Antoinette is caught between two cultures—the one she grew up with on the island and the English. Rhys shows this: “I was glad to be like an English girl but I missed the taste of Christophine’s cooking” (35). Although she wanted to be like the other girls of her station she craved the food she was comfortable with and used to. Antoinette and her family were leftovers of colonialism in a time where it wasn’t popular to be so. Rhys ramps up tension. Rhys uses language to trigger response. Her brother who had a learning deficiency was killed in the fire (46), and the events that transpired drove her mother crazy (48).

There are at least twenty-six references in Part Two which refer to the declining relationship and descent into madness, but what makes Antoinette’s descent unique is the way Rhys unfolds the events. It started off with the arranged marriage (76), which is innocuous, except that Richard Mason, whose father was Antoinette’s step-father, trusted Rochester “completely” (75) and Rochester admits to having “given a faultless performance” (77). It’s paradise, but Rhys writes it in a way that is creepy—she also shows the difference in perspective between Rochester and Antoinette: Antoinette thinks all of Rochester’s notions of England are ‘unreal,’ and Rochester thinks that “rivers and mountains and the sea” are “like a dream” (80-81). Rhys sets the tension at a low after all the drama in Antoinette’s past, but Rhys ramps it up little by little. Once the newlyweds settle into their honeymoon, Rochester is contacted by a man claiming to be “Daniel Cosway,” the black son of Antoinette’s father who tells him a story about what happened to the Cosways (95-99). What is interesting about this section is the apparent motive of Daniel Cosway, which Rhys left ambiguous; he could have been genuine, or he could have been a money-grabbing tool who was using the false story sprinkled with truth as racial payback for what the Cosways and other slave owners did to the slaves.

The difference between men and women in this society are enforced in this novel, which ratchets the tension up even higher:

You must understand that I am not rich now, I have no money of my own at all, everything I have belongs to him. (110)

Everything went to the male of the relationship because the man acting on her step-father’s behalf, Richard Mason, trusted the word of a ‘gentleman.’ When Christophine questions Antoinette about it, Antoinette says it is British Law (110), which at the time it was. The only person who spoke up for her was Aunt Cora who spoke with Mason about it. Mason said “I would trust him with my life,” and Aunt Cora responded “You are trusting him with her life, not yours” (115). This is a simple, yet essential exchange which Rhys planned—the only person to question who the inheritance belongs to would be another woman! And instead of continuing in quotes, Rhys goes on: “He told her for God’s sake shut up you old fool and banged the door when he left” (115). Mason knew exactly what he was doing and he as well as Rochester were equally responsible for Antoinette’s downfall. By the time Rochester gets around to talking to Antoinette about the whole family situation, he’s already made up his mind and refuses to hear her side of the story (128-129). Antoinette says: “There is always the other side, always” (128). This is a line which works on many levels, and the story is so much better because of it. They have several discussions about it, but then something strange happens—Rochester calls Antoinette “Bertha” (147). Antoinette retorts:

“Bertha is not my name. You are trying to make me into someone else, calling me by another name. I know, that’s obeah too.” (147)

For him to change her name is to take her power. She thinks he’s working magic on her, but it’s worse than that: he’s using logic. Charlotte knows it too—in one part, she confronts Rochester and tells him that “[e]verybody know that you marry her for her money and you take it all. And then you want to break her up” (152). Charlotte knew exactly where the relationship was going, but Rochester stopped her in her tracks by threatening to call the police (159) and tell them that Charlotte was practicing sorcery on Antoinette and that the cure “made her worse” (155). The way Rhys set up the story shows how a writer can create the downfall of a character by going deep into the past and pulling forth themes which can work on the character. For example, Antoinette went to Charlotte for help to make Rochester love her; the “cure” backfired (112-113).

Writers can trace their lineage through books, but although all writers are readers, not all readers are writers. Several renditions of the book have been published and adaptations for TV and film made. There was a 1993 film adaptation, a 1997 opera adaptation, a 2004 BBC Radio adaptation, and a 2006 TV adaptation. This novel has a reach further than that—even to inspire musicians. In 2006, Stevie Nicks’s song “Wide Sargasso Sea” on her album In Your Dreams retold the story. For many readers, Rhys changed the way they looked at Rochester in Jane Eyre, but she did something more important—she showed how an ordinary woman could become a mad woman in a tower.

I give this book three stars.

Hey, I'm Darlene, a nomadic writer and teacher. If you're looking for writing prompts, inspiration, and a fellow writer to commiserate with, you've come to the right place. If you're a reader looking for a fun mix of poetry, romance, science and fiction, you've found a buddy!
View all posts by Darlene Reilley →
This entry was posted in Book Reviews, reading and tagged book review, Book Reviews, how to read like a writer, Jean Rhys, Wide Sargasso Sea. Bookmark the permalink.