Posted on February 8, 2017 by Darlene Reilley 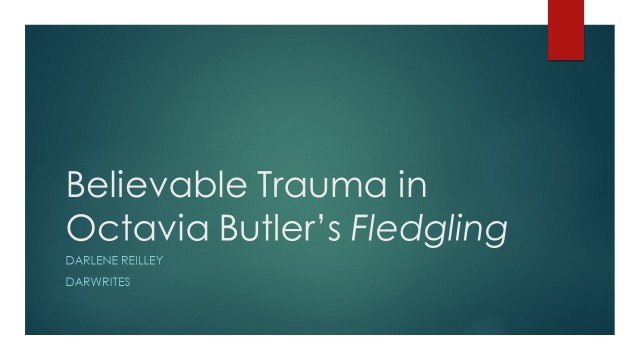 Welcome, readers and writers! I’m excited to talk with you about Octavia Butler’s Fledgling. For me, this book rates five stars! I loved the book because of the characters. What follows is an annotation exploring Fledgling from a writer’s perspective…and why I appreciated it.

Some writers are capable of making a reader feel so deeply about a character, the readers cry. I was connected to Shori in Octavia Butler’s Fledgling because she is pitiful and I am empathetic—even though she is a vampire, her entire life was taken away from her. Butler created a dynamic character because of Shori’s memory loss due to a severe traumatic brain injury (TBI). In this annotation, I explore how Butler shows Shori’s memory loss, including Shori’s short-term memory of the accident, her inability to recall events, and the reactions of the people around her which reinforce the feeling of tragic event.

In the beginning we only know that something awful happened to the main character—she doesn’t even recall her name (1). Instead of describing the symptoms of injury—physical, psychological, emotional impairment, and behavioral impairment—Butler chose to dive into the character’s head and explore the emotional reaction, the visceral reaction of what it feels like to have no memory. “I awoke to darkness. I was hungry—starving!—and I was in pain. There was nothing in my world but hunger and pain…” (1); she even questions if she is blind or not (1). Butler goes on to describe an emotionally-impactful event—the eating of “the creature” (2)— and she is so grateful because all she can do is function—eat, sleep, heal. This is an effective use of Maslow’s hierarchy because it shows that everything—even the taboo of eating a human—is thrown to the wayside because basic needs are not met. Later in the chapter, Butler writes:

I saw all this, but still, I had no idea where I was or where I should be or how I had come to be there or even why I was there—there was so much I didn’t know. (3).

Butler uses Abraham Maslow’s hierarchy of needs throughout the novel, but specifically in this section to show that when a creature is wounded—even a vampire—it goes back to the basics. Maslow’s Hierarchy divides needs into categories based: physiological, safety, social, esteem, and self-actualization; Maslow suggests that if a lower need such as physiological is not met, a higher need like social or esteem cannot be met—basic needs like food, shelter, clothing, and safety must be met before dealing with other things…like memory loss (Maslow). For Shori, it sets off a journey of life and death and a search for who she really is. We learn later that she has amnesia because of the blow to her head (33, 61-62). This story isn’t just about vampires—it’s about the human condition. Butler continues to explore the memory of the accident and the amnesia throughout the book.

One way Butler achieves the exploration is through Shori’s continuing inability to recall events that occurred before her recovery in the cave. Butler writes about Shori’s physical symptoms (“two places [where] my head felt crusty and lumpy and … almost soft” [1]), her sensory symptoms including the lack of light (1, 2), and cognitive symptoms “somehow I had been hurt very badly, and yet I couldn’t remember how” (4). The character doesn’t even remember that clothing is normal until her other symptoms are taken care of (4). These are typical reactions of someone who has TBI, and Butler uses specific examples of this behavior to showcase Shori’s symptoms.

The reactions of the people around her reinforces the buy-in. The people around her either know her and love her or want to kill her. The emotional impact is felt strongest when Shori is reintroduced to her family, particularly her reintroduction to her mothers’ fathers. When Shori explains to them what happened to her, but it’s the reaction that Butler writes that holds the key to emotion:

Konstantin gazed down at me with almost too much sympathy. A human who looked that way would surely cry. After a moment, he said, “Shori, we’re your mothers’ fathers. You’ve known us all your life. (207-208)

Butler pulls off the gut punch and then follows the segment up with Shori’s remark:

Butler achieves a blow to the gut with the elders’ reaction, and then hits the reader with an uppercut that knocks her out and makes her cry.

When someone tells her that her mother gave her a pendant found in the fire that destroyed her family, Shori tries to remember her mother: “But there was nothing. All of my life had been erased, and I could not bring it back” (132). Throughout this book, Butler shows how to weave memory loss into a novel and make it appear realistic. Shori’s memory loss is a touchstone of the novel. She cannot remember a lot of things—at first it is basic information, and then later she cannot remember who anyone is—not even her mother’s father, who she knew all her life. But those aren’t the details that get her into trouble—the memory loss is so effective because what she doesn’t know can hurt her. She can only survive by following her instincts and trusting her family and creating a new branch of her own. This book was published in 2005, and has good company with other novels which show the impact of memory loss including The Maze Runner by James Dashner, The English Patient by Michael Ondaatje, and Dhalgren by Samuel R. Delany.

Hey, I'm Darlene, a nomadic writer and teacher. If you're looking for writing prompts, inspiration, and a fellow writer to commiserate with, you've come to the right place. If you're a reader looking for a fun mix of poetry, romance, science and fiction, you've found a buddy!
View all posts by Darlene Reilley →
This entry was posted in Writing Secrets. Bookmark the permalink.